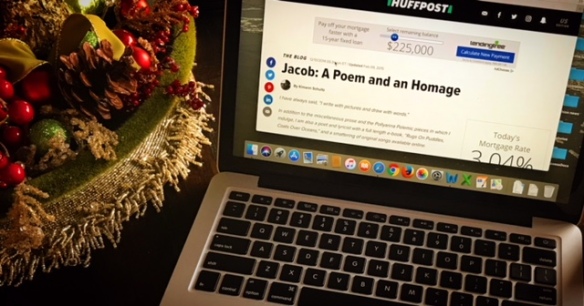 Jacob – A Denouement in One Act, the 1st edition hardback illustrated by Adam Oehlers, is available at eBay – click here to purchase

Have you ever wondered: What about poor, old Jacob Marley?

Then, this story is for you….

Jacob – A Denouement in One Act by Kimann Schultz, was first written in 2014, based on a poem of the same name, also written in 2014. The first draft of Jacob was initially shared at Huffington Post in December 2017, in four consecutive posts, beginning on St Nicholas Day and finalizing on Christmas Eve, with an alternate ending offered on New Year’s Eve.

Be sure to visit www.JacobMarleyStory.com

Inquiries may be sent to jacobmarleystory@gmail.com

Jacob – A Denouement in One Act Stave I

Jacob – A Denouement in One Act Stave II

Jacob – A Denouement in One Act Stave Final

Jacob – A Denouement in One Act,  Stave Final, Alternate Ending

While this story remains for anyone who may ever have wondered, “What about poor, old Jacob Marley?”, this “other” ending is for anyone who, like me, recognizes the parallels between Dickens’ masterpiece and Sci-Fi classics, where time travel and alternate universes are tapped and outcomes are explored, who cannot help but to illuminate possible, additional aspects to even such as the rest of this story; for, thanks to the infinite realms that are our universe and the creativity we posses, everything remains possible

A Christmas Carol is a ghost story and a Christmas story, but it could also be considered Science Fiction’s best-loved ancestor.

As free speech advocate and champion of freedom of creative expression, which is in singular danger these days dueto broad spectrum prohibitionistic, censorial agendas, I choose to exercise my right to let Art, in this case a deeply personal literary project of mine, to speak for my beliefs and hopes as creative contributor.

I like to say: The Arts are a Bridge between Man and Mankind.